E-Invoicing Under GST: A Critical Analysis 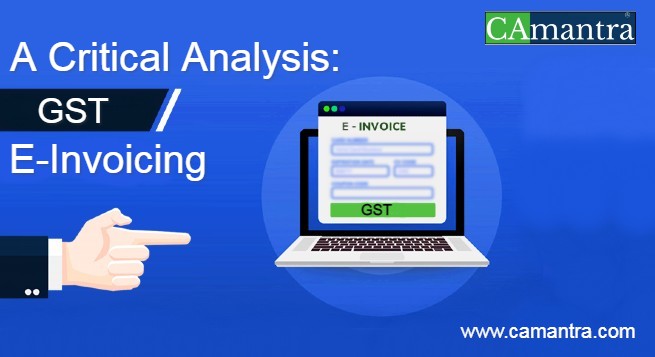 Since, e-invoice has not been defined in the CGST Act, many people are having misconception about the whole concept of e-invoicing and it is believed by many that e-invoicing is electronically generation of the invoice on an online portal. However, the same is not actually correct, e-invoicing means a system whereby the invoice is prepared by including such particulars as are contained in Form GST INV-01 and after obtaining IRN a.k.a. Invoice Reference Number through uploading information contained therein on the Common GST Electronic Portal. Therefore, essentially in the e-invoicing system the invoice is generated in the same manner as was normally being issued by assesses and after that the same is validated on common IRP portal. QR code contains the unique IRN and after that digital signature is generated so that it can be verified by an Offline App.

Advantages of E-Invoicing To Trade :-

Advantages of E-Invoicing to Government :-

Thus, one of the main benefit that is sought to be achieved by introducing e-invoicing system is reduction and identification of fraud.

The government is making more efforts by introducing different systems and legislatures to curb the frauds and to strictly grant the ITC to the business. Government needs to focus its attention and efforts for making a business-friendly environment for the genuine business so that the businessman who are sincerely engaged in doing trade and commerce feels secure and are able to flourish. Here, it is also essential to note that the GST was introduced with the aim to ease the whole ecosystem to do business and also that the credit chain is not broken and finally to remove the cascading effect of taxes but time and again the policies introduced by way of rules or notifications suggests that taking credit of the taxes paid at the input stage is only made arduous and cumbersome.

It is crucial to understand that in any economy 99% of the businesses are not functioning or operating to commit a fraud but are sincerely thriving to succeed. Thus, rather than making policies just to control and penalize the fraudsters, the government should strive to create an environment that is business friendly and provides a sustainable ecosystem to the trade at large. Frequently amending and changing the whole systems creates fear in the minds of business and they lose their trust on the government and tend to look for alternatives. The Government needs to frame the policies that are consistently followed and are user friendly. The countries that are consistent in their policies and legislations are a favorable destination for even the foreign investors as they feel secure investing in those countries. Instead of applying the whole energy, in controlling and identifying the frauds, by bringing frequent changes in the compliances, The Government needs to make the tax administration efficient and effective.

Further, the e-invoicing system is introduced with the objective of auto matching of ITC Claims but, at this moment, it is hard to say that how e-invoicing would be proved for meeting this objective. Currently also assesses are allowed ITC on the basis of the outward supply declared by their suppliers in their return filed in the form GSTR -1. Thus, it seems like there will be no change by effecting this new invoicing system in respect of matching of ITC claims as the same is also being done presently. Further, it is unjustified on the part of government to load assesses with the burden of so many compliance only for their apprehensions regarding the frauds & errors.

Here it is also crucial to see that even after applying the requirement of e-invoicing the recipients of supplies are not allowed to take the ITC merely on the basis of the e-invoice raised by the supplier and the recipient needs to confirm that whether the supplier has deposited the tax with the government of not. Thus, it seems that the registered persons are not getting any benefits from the e-invoicing compliances in reality.

Government and the administration are making the rules, issuing notification, that for the interest of business and economy as whole the, provisions should be made business friendly and easy in compliance. The provisions should not be made at the effuse that all the people doing business have trappy intentions just to evade tax. It is the huge responsibility of the government and tax administration to provide a healthy economic environment so that more and more people, including the foreign investors, are encouraged to invest in the economy which would ultimately help in the employment creation and wealth creation at large.