Input Tax Credit under GST Law- Is it a Vested Right? 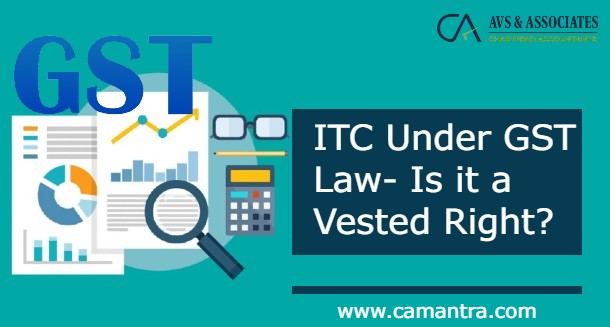 A vested right counted as an absolute right over any asset which cannot be taken over without the consent of its owner.

Nature of ITC under GST Law

Section 16(1) is the elementary provision in the GST Law which confers the eligibility to claim ITC to every registered person. However, the eligibility is not absolute & requires compliance with few specified conditions after which ITC can be availed.

Therefore, Section 16, 17 and 18 of the CGST Act, 2017 specifies certain conditions for benefit of ITC by a registered person. Some of these conditions are pre-conditions and some are post-conditions to the availment of ITC. Until and unless these conditions are satisfied, the right to claim ITC is incomplete and they are subject to operation of law & can be taken away by it. In Eicher Motors Ltd. and Anr V/S Union of India and Ors. Etc, (1999) 152 CTR (SC) 273, the Supreme Court of India considered MODVAT Credit as an ‘indefeasible right’. However, it needs to be understood that this indefeasible right as stated by the Hon’ble Court is created only once the same gets vested and not before that. Once a right gets vested, it can’t be taken away through any authority and then it gets indefeasible. Any infringement by any person/authority on these kind of rights, can be interfered by the court.

The legislative intent in this context is very clear that the right to claim input tax credit is in the nature of concession or benefit granted to a registered person and is not an absolute right. The legislature has clearly conveyed their intention that ITC benefit can be withdrawn by the department if these conditions are not complied with in letter and spirit.

Section 16(1) which provides eligibility to avail ITC benefit, before allowing any such benefit, speaks about “conditions & restrictions as may be prescribed”. Further, it states that input tax credit can be availed only by a registered person.

In Section 2(94) the definition of “registered person” is given which are as follow, a registered person is the person who is registered under section 25 but does not include a person having a UIN (Unique Identity Number). However, Section 9(1) which is used for levy of taxes states that CGST shall have to be paid by every taxable person. In Section 2(107) the definition of “taxable person” is given which are as follow, a taxable person is a person who is registered or liable to be registered under section 22 or section 24. Therefore, it is stated very clearly that tax will have to be paid by every taxable. So, even unregistered persons are liable to pay taxes. Input tax credit can be claimed only by a registered person which may be said to be in the nature of a condition. Thus, in case, a person who is liable to pay taxes, but does not get himself /herself registered, shall have to pay taxes payable by him/her till the date of his/her registration, but he/she shall not be able to avail ITC on the purchases made by him/her, if any.

The right to get ITC does not vest until all the conditions mentioned in Section 16, 17 & 18 are satisfied. Once it get vest, then it becomes absolute and is guarded by Article 300A of the Indian Constitution which gives Right of Property to every citizen. However, it is only a constitutional right & not a fundamental right.

Is transitional credit a vested right?

The CGST Act, 2017- Section 140 contains Transitional Provisions so as to ensure smooth transition from the erstwhile regime. Further, to enable seamless flow of credit, these provisions contained certain provisions for claiming credit of tax paid on stock lying as on 01 July, 2017. However, few due dates were specified for claiming the same & crediting the ITC in the Electronic Credit Ledger under the GST Regime. Some registered persons who were legitimately entitled to avail such tax credit, due to some reasons could not file the return specified for the purpose and therefore could not take the credit which was otherwise available to them. Now think what if such a credit could lapse due to a procedural default on the part of a registered person?

In this reference, the Hon’ble Gujarat High Court in M/s. Siddharth Enterprises V/S The Nodal Officer, TS-684-HC-2019(GUJ)-NT read as under:

“23. The entitlement of credit of eligible duties on the purchases made in the pre-GST regime according to the existing CENVAT credit rules is a vested right and, so, it cannot be taken away by virtue of the Central GST Rules, 2017- Rule 117, with retrospective effect for failure to file the form GST Tran-1 within the due date, i.e. 27 December 2017. The provision for facility of credit is as good as the tax paid till the tax is adjusted and, therefore, the right to the credit had become absolute under the Central Excise Act and, therefore, the credit is indefeasible and the same cannot be taken away.

Present Scenario of Availability of ITC:

It is well understood that ITC is one of the most misused concept of the GST Law. However, in this context, the following needs a deeper reading:

“Mitigation of cascading of taxes expected to result in reduction in final price of goods or services;”

The above was perceived to be a benefit of GST implementation as stated by the Ministry of Finance vide Press Release dated 10 March 2017 and thus a seamless flow of credit was ensured under the GST Regime. However, later, because of the misdeeds of some unscrupulous elements, new amendments started flowing in which ultimately compromised with the very basic intent behind enactment of the law and thereby causing idle trouble to the honest taxpayer.

As per this discussion, we can understand that it is a well settled law that ITC is in the nature of a benefit or concession which is offered by the statute and is contingent upon specified conditions satisfaction. Input tax credit under the GST Law cannot be said to be a vested right at the time of procurement of inputs. However, only after complying with all the conditions attached to it, it becomes a vested right. So, a complete knowledge of all the essential conditions is necessary to declare it a vested right.