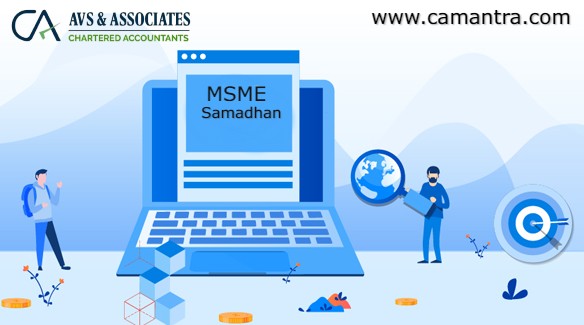 MSME Samadhaan Portal was established to entitle all the micro and small-scale enterprises of India. It enables micro & small business owner to directly register their cases related to delayed payments.

MSMED (Micro, Small and Medium Enterprise Development) Act, 2006 covers the provisions to deal with delayed payment cases to Micro and Small Enterprises (MSEs). According to the provisions, the buyer is responsible to pay compound interest with monthly rests to the supplier on the amount at 3 times of the bank rate notified by Reserve Bank in case he/she does not make payment to the supplier for the supplies of goods or services within 45 days of the day of acceptance of the goods/service or the deemed day of acceptance.

Micro and Small Enterprise Facilitation Council (MSEFC) establish by state governments for dispute settlement on delayed payments. Any Micro or small enterprise who have valid Udyog Aadhar (UAM) can apply. Micro and Small Enterprise Facilitation Council of the State will be responsible to issue directives to the buyer unit for payment of due amount with interest. These will be done as mentioned under the MSMED Act 2006, provision. Each reference made to MSEFC will be decided within a time period of 90 days from the date of making such a reference as per the provisions placed in the Act.

Before the concerned MSEFC of their State/UT, ministry of MSME, took the initiative for online applications filing of MSE supplier units against the defaulted buyer of goods or services. After that, the MSEFC Council checks and verifies those applications and go for necessary actions to dispute settlement.

What are the Statutory Provisions of Delayed Payment under MSMED Act, 2006?

Micro, Small and Medium Enterprise Development Act 2006 has laid down the provisions to deal with the cases of delayed payments to MSEs, which are as follows:

According to the Section 16 of the MSMED Act, 2006, a buyer is liable to pay a compounded interest, in case he/she fails to make a payment to the MSE supplies within forty five days from the date of receiving the goods /service. The interest is monthly amplified on the amount at three times of the bank rate as notified by the RBI.

According to the provisions prescribed under Section 20 & Section 21 of the Act, the State Governments need to establish MSEFC aka Micro and Small Enterprise Facilitation Council. Any Medium and small business with a valid Udyog Aadhar Number (UAN) can take the benefit of filing.

Every State and UT has notified authority for filing Entrepreneurs Memorandum. Except Assam, Arunachal Pradesh, and Manipur; around 33 States or Union Territories have notified rules of MSEFC and constituted MSEFCs by following to the provisions laid down under MSMED Act 2006.

Section 19 said that if an Appellant files an appeal, then no court shall entertain his/her application for setting aside any decree or award, order by the MSEFC until the appellant (not being supplier) has deposited with it, 75% of the decree or award amount.

After successful submission of application, concerned department issues notice both parties i.e. buyer & supplier and try to resolve the disputed matter with manual consent. In the case where the dispute is not sorted with mutual consent then the concerned department will file a formal case against the buyer and further proceeding will be governed by the MSMED Act, 2006.

You can also take the benefits of Government Schemes by registering under the MSMED Act, 2006.