Section 43B- Deductions Allowable On Payment 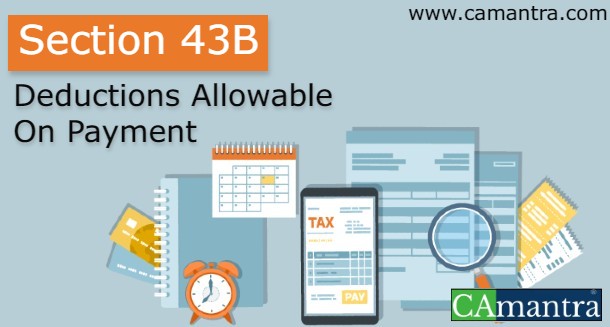 As a taxpayer, you might be claiming different expenses & exemptions to lesser your income tax liability, but do you know that there are some deductions that you cannot claim unless you have actually paid for them. Let’s discuss the income tax provisions laid out under Section 43B of the Income Tax Act. Section 43B prescribes that specific statutory expenses could be claimed only in the year of actual payment. This section disallows the expenses which are not paid in the FY or prior to the due date of filing ITR. In brief, Section 43B deals with specific types of payments and guides an assessee to claim this kind of payment as an expense in the assessment year in which it’s actually paid and not in the year where the liability for this kind of payment was incurred.

Taxes – Any tax, cess, duties or fees that are paid under any law for the time being in force are allowed as a deduction only when paid.

Interest on borrowings – Interest on loans borrowed here belongs to the interest payable on the loans borrowed by the taxpayer from a public financial institution, state financial institution, state industrial investment corporations and are based on the t&C of such contract. Such payment of interest on the loan availed from aforesaid institutions and also from scheduled banks will be allowed as a deducted from the business income of taxpayer. Also, if the interests have been converted into a loan, such conversion won’t be considered as a payment of interest and would not be allowed as a deduction.

Leave Cncashment – leave encashment count as the sum of money paid that an employer pays to the employees leaving the organization for their unutilized leaves.

Payment to Indian Railways – An assessee can claim the payment as an expense to Indian railways if it has been remitted to the accounts of Indian railway in the financial year or before making the ITR. If such payment is remitted after the due date of filling the income tax returns, such expense would be allowed as a deduction in the year of actual payment.

Thus, for assessees having income from business or profession and maintaining their books of accounts under the mercantile basis of accounting, it’s crucial to keep in mind the above provisions, otherwise, they may not be enabled to such deductions.